OGN, imagines that it is more than two years since Nigeria signed agreements with solar power plants developers but no single electron has been produced yet.

The agreement with the 14 investors signalled the country’s readiness to embrace utility scale independent solar power projects as part of its pursuit of a 30 by 30 energy mix policy whereby 30% of Nigeria’s total energy sources would be derived from renewable energy sources by 2030.

Amidst great hopes and fanfare especially for what the project would bring when they finally come online within 2 to 3 years, the government through its power minister, Mr. Babatunde Fashola, declared that it was a bold step to end the regular hostage the country experienced from constant pipeline bursts in the Niger Delta, which in turn affects power generation from gas-based generators.

“It is a journey that would ensure that in future it will be impossible to hold this country to ransom by controlling any particular source of fuel for electricity,” Fashola declared.

But since then, hiccups such as a prolonged renegotiation of the terms of the PPAs with regards to cost per kilowatt hour (kWh) from $11.5 to $7.5 by the finance ministry; as well as deepening mistrust between the government and investors, have caused an unending extension in the deadline for the execution of the power projects.

Also to be considered as part of the reasons the projects have not progressed to final investment decision (FID) and construction have been Nigeria’s wonky economy which slid into recession in 2016 and perhaps raised a lot of fears amongst investors.

Saddled with the task of executing the PPAs, Mr. Waziri Bintube, who was an acting head of the NBET at the time the PPAs were signed, said the target for first electrons to flow from the plants was 18 months.

Filled with a lot of optimism, Bintube reportedly declared: “This is a revolution that is aimed at diversifying the energy mix of the country, especially to resolve the lingering power crisis in Nigeria.”

“It is something that is critical at this point in time because of the disruptions to gas supply. For as you know this country is about 86 per cent dependent on thermal gas power plants for its electricity needs, while about 14 per cent is from hydro power plants.

“We don’t have nuclear nor solar, so this will be the first renewable energy coming from the national grid and we are committed to delivering on it once the projects reach financial close.

“Therefore, our target is that within 12 to 18 months we would have delivered the projects. We have about 12 foreign developers and this is a mark of confidence in the Nigerian economy, as the projects will bring in foreign direct investments into the country.”

He also noted the NBET will be the guaranteed buyer of power generated from the plants to be built in Enugu; Bauchi; Nasarawa; Katsina; Jigawa; Sokoto; Plateau; and Kaduna at a collective cost of $2.5 billion.

Shortly after the PPAs were signed, 10 out of the 14 front-runner solar power developers reportedly posted development security bond into the account of the NBET to signal their intention to quickly achieve financial close for the projects.

The NBET in a statement it sent out to the press, acknowledged its receipt of Letters of Credit (LC) for the security bonds from the 10 developers.

“The Nigerian Bulk Electricity Trading Plc (NBET) is pleased to announce that 10 of the 11 Independent Power Producers (IPP) that executed the front-runner solar power purchase agreements (PPAs) on July 21, 2016 successfully posted their development securities to NBET on the due date of September 9th, 2016,” the NBET said then.

“The development security will be refunded to the IPP when the closing date is met after which the IPP will begin construction of the plant.” 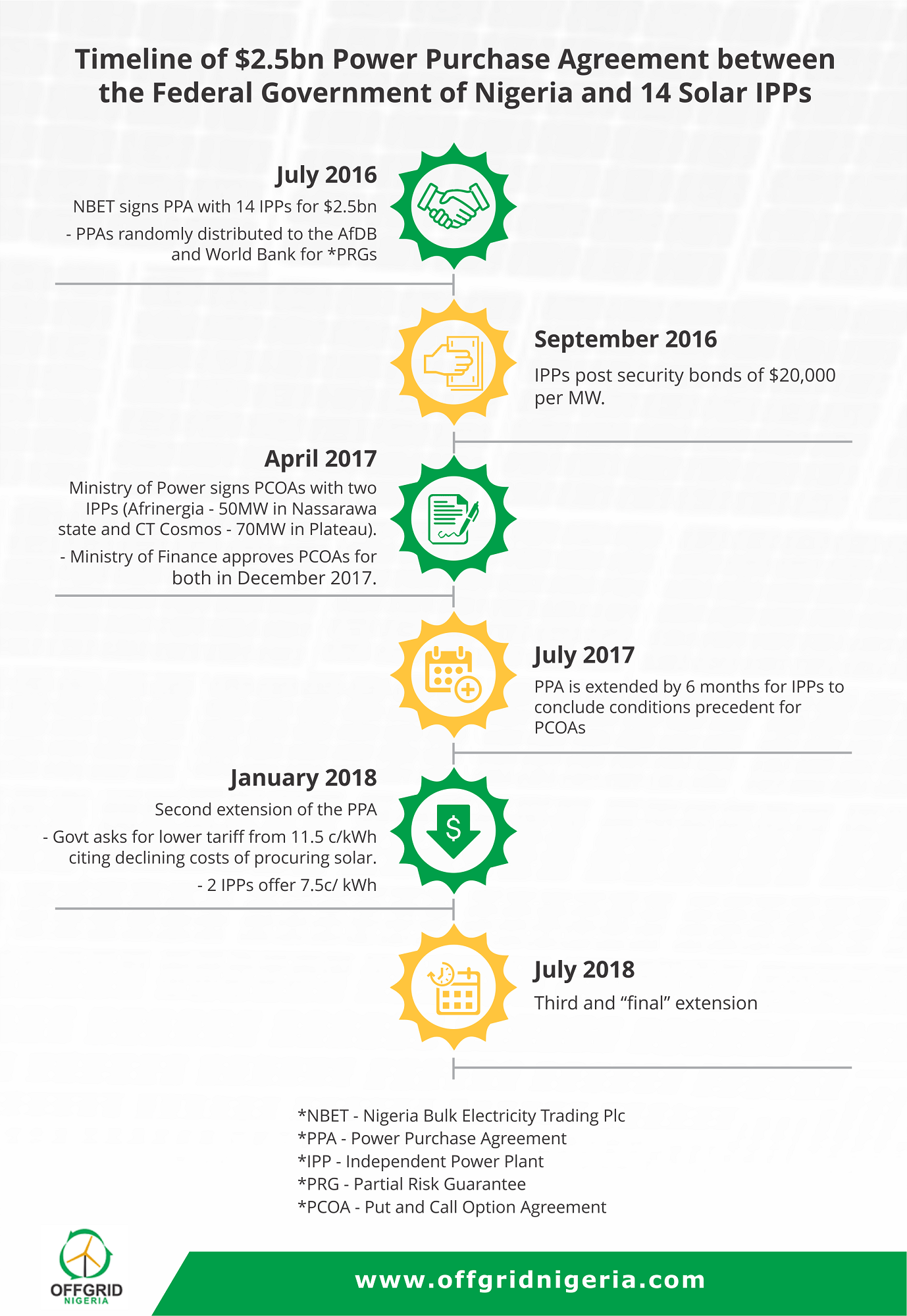 So, what went wrong?

Fast-forward into 2018, and no electron has flowed from the plants into the grid because no plant has been built by any of the investors.

But to understand what may have gone wrong with the plan, OGN reached out to a parties involved from across board – government and investors, and deduced that nothing but a change in priority may have spoiled the party for the projects.

For instance, while Fashola, claimed the investors made demands the government found outrageous and so decided to lay low on the projects, documents obtained by local newspaper – THISDAY, claimed the government had made attempts to renegotiate the terms in the PPAs and this led to the current situation.

In the documents which THISDAY claimed to have seen from the ministry of finance, the government through the immediate past finance minister, Kemi Adeosun, queried the 11.5 cent cost of power approved for the projects.

The government equally claimed the procurement processes were not clear to it and as such it would hold back approval of Put Call Option Agreements (PCOAs) for the projects.

Additionally, the government contended that the average cost of procuring solar power globally had continued to decline and on that basis, Nigeria was at the risk of an unhealthy sovereign risk exposure if it approved PCOAs on 11.5 cent per kilowatt hour (Kwh) for the projects.

On their part, the investors informed OGN the government acted irresponsibly on the development. They claimed Nigeria was a new market for such utility scale solar projects and as such the reluctance to completely throw in their hats into the projects without any form of risk guarantees from the government.

They also hinged their request for guarantees on the back of the current financial challenges of Nigeria’s electricity market, wherein payments for electrons sent to homes and offices are seldom recovered by the local distribution companies.